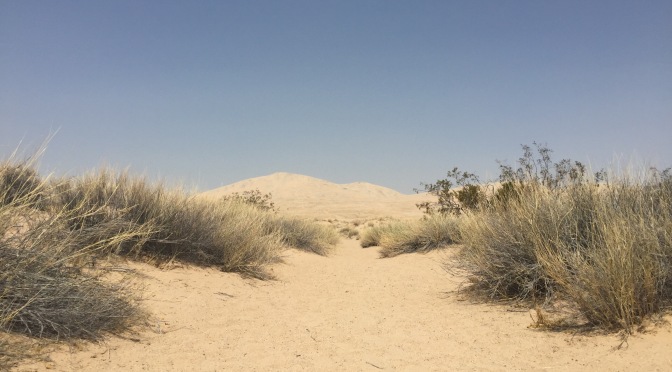 We struck out to explore the Mojave this morning, but much to our surprise were greeted with what appeared to be a heavy fog covering the entire area. Visibility was fine up until about a mile out, where it just dropped off completely. Everything past that point became a confused haze of blue and tan, entire mountains disappearing into the background, the sands of the desert just sort of, ending. We later learned that this was an incredibly unusual phenomenon, one which the ranger we asked had never seen before in his life. Apparently, the massive forest fires happening in Southern California right now have created a enormous smog cloud, which has moved over us since yesterday morning. Unperturbed, we continued into the Mojave and climbed the Kelso Dunes before heading back north towards Vegas. The haze has lightened since then, but still hangs over the land for considerable distance. Visibility has increased to maybe two or three miles, but past that all you can see is a wall of light grey, with tan towards the bottom. More updates to come.