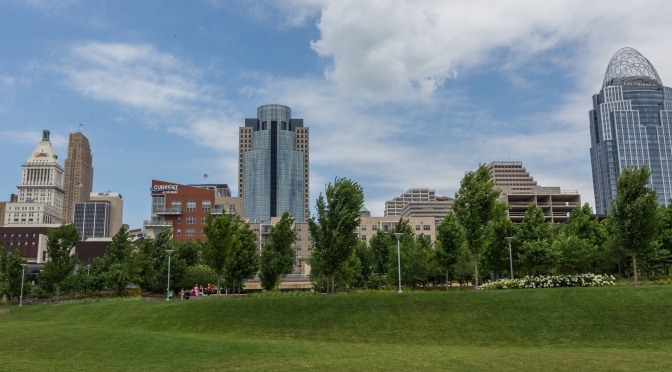 Cincinnati, an old American gem on the southern border of Ohio, is a city garnered by its industrial era achievements, trying to find its purpose in the modern world. Now the 66th most populous city in the United States, at one point Cincinnati was a true American powerhouse, much like Pittsburgh. Its strategic position as a river city made it a center of industry and commerce, rivaling even many of the coastal cities and at one point rising to the 6th largest city in the country (during the 1800’s). Over the years, the rest of the world began to slowly outpace Cincinnati and in the centuries that followed, it has meandered through a variety of different cultural and architectural stages, finally resting on what seems to be a family haven for the middle-class. That being said, it’s old-world glory still shines through in the form of classically built skyscrapers, old industrial river-bridges and the oldest major league team in baseball, the Reds. 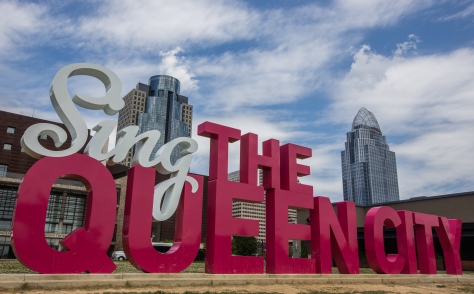 In fact, Cincinnati was so prolific in the 1800’s it became known colloquially as the “Paris of the states”, due in large to the grandeur of its architectural projects, theaters and scenery. Americans living there during that time were so proud of these accomplishments that they dubbed it, “The Queen of the West”, which had just been extended by the Louisiana purchase about a decade before and was still largely untamed. Today, it is still known as the Queen City, references to which can be found all across the clustered metropolis and even though it no longer holds its larger than life status, it still finds ways to remind you how it got its name.

Our journey into the city started out on Mt. Adams, perhaps the nicest area of the city proper. Mt. Adams is a small concentration of about 1,500 people living in the serenity and sense of seclusion offered by Eden Park, which almost completely surrounds the community. Home to some of the oldest waterworks in the city, as well as the Cincinnati Art Museum, the Krohn Conservatory and some gorgeous river overlooks, Eden Park is somewhere you will want to include on any excursion to the city, really no matter the reason. Its position atop the Ohio River ramps up the humidity all across the city, and especially at the higher elevations of Mt. Adams, it will become apparent as soon as you exit your vehicle. It hits you like a thick, pillowy wall and each step you take your clothes will become more and more an inseparable part of your body, until you’re literally just wearing one huge pit stain. Fear not though, the city has prepared for this overwhelming heat with misting stations, fountains, plus a whole mess of other water features lining the river and populating the urban areas, ready to cool off you and inevitably about 20 or so hyper-active children.

The walk through Eden Park can take anywhere from 30 minutes to a full two hours, depending on how thorough you plan to be. The park itself makes a rather concise semi-circle around Mt. Adams and has maps placed every so often to help guide you along the few main paths. We decided to see the park and the conservatory in one go but because at the time it looked like rain, we opted to return later in the day to visit the art museum and get the city shots while the weather held. After walking for about 15 or so minutes along the massive fountain and subsequent forest trails that can be found right after the main parking lot, we arrived at Krohn, a small but very well done botanical garden, nestled in the heart of Eden Park. Admission is $4 and though there are only two major rooms to see at most times of the year, both are filled with a wide variety of old-growth jungle plants. The third room, the main attraction of Krohn, is the butterfly room, where the vast majority of the conservatories flower species are housed. Every year, Krohn holds a special event, coinciding with the emergence of the butterflies. Though we arrived just a day too late to see it for ourselves, a quick search will tell you that not only is it supposed to be quite spectacular, but they’re even themed each year, with 2016 being “Butterflies of the Caribbean.”

After departing Eden Park, we headed into the city to find an overlook and were stricken by its rather progressive atmosphere. Everything is clean and shiny, old industrial era architecture hugs the corners of the downtown streets, draped in modern signage and sandwiched between towering glass high-rises. As we walked towards the center of downtown we passed the city plaza, where street vendors had gathered by the dozen for the lunch rush and people seemed to be setting up for an evening concert, hosted during some sort of summer festival which was to be taking place. The constant buzzing of ‘crickets’ could be heard everywhere in the city, electronic devices built into the crosswalks which would “chirp” to let the blind, and anyone not paying close attention, know that it was safe to walk. As we meandered through downtown, we noticed skywalks crisscrossing over streets and between buildings, connecting a vast portion of the downtown area without the need for ever stepping foot outdoors, a way to avoid the cloud of suffocating humidity seeping off the Ohio River. After a quick search for the best overlooks in the city, we hit the jackpot with a place called “Carew Tower”, the tallest structure in the city (not counting the Great American building because the top of it is just scaffolding). The 50 story skyscraper is topped with an open observation deck, affording a spectacular 360 degree view of the entire city, not to mention a good amount of Kentucky as well.

After an elevator ride about 40 stories up, during which be prepared for your ears to pop more than once, you will come to an area where you must exit the first elevator, and take an even older, not to mention slower elevator the rest of the way. This second elevator is almost amusing in its size, reasonably big enough to fit one normal sized person, the two of us crammed into it and rode for about a minute and a half, only to be greeted by a flight of stairs. Finally, after climbing the remaining three or so floors, we reached a small room in the middle of the observation deck (the one with the flag coming out of it) and were told to leave our backpacks in the room, as they had been banned on the deck after a pair of bros base jumped off the edge a couple years back. At long last we stepped out onto the deck itself, and our arduous journey up the tower was rewarded with a truly rare view. That being said, it was hard not to note how much better the city looks from the ground than from the sky, turns out no one pays to clean the top of most buildings. Even so it’s well worth the trip. Admission is $4, cash only, so plan accordingly, but it was easily the best $4 we had spent all day.

After leaving the tower, we decided to stop by the riverfront, a short walk of perhaps 15 minutes if you’re coming from downtown, but by the time we left the tower the sky had begun to clear and the wind responsible made walking towards the source of the humidity much more bearable. The riverfront itself is basically one giant park, quite new in fact, and garnered with all the things you would expect a nice new park to have. Fountains, extensive play grounds, informational panels and a variety of other amenities help solidify its position as one of the top things to do in Cincinnati. The river itself is honestly much less interesting than the development lining it, but still worth the look, especially if you’re already down there. Stairs leading up to walkways that straddle the many bridges into Kentucky can be easily accessed throughout the area, and the occasional steamboat can even be seen chugging it’s way across the water in all its Golden Age glory.

Our final stop in the city proper was actually a return to Eden Park, this time however, it was to see the Cincinnati Art Museum. Profiting from the city’s old industrial prowess in much the same way as the DIA or the Carnegie, the Cincinnati Art Museum has acquired quite an impressive collection of rare and famous works, either purchased for or donated by one of the many local magnates during the city’s heyday. Since then, the museum has grown considerably and now attracts a wide variety of newer art as well Modernist pieces and large roaming galleries, even a dedicated library located on one of the third floor wings, complete with terrace outlooks over Eden Park below. The museum itself is deceptive in size, with new wings hidden around every corner, you would never guess it’s true depths simply from seeing it’s exterior. It took us a solid two hours to see it all and we were going fast at that. Admission is free, though donations are encouraged but not required. Definitely worth the stop if you have time in Eden Park to spare. Honestly it may be one of the best places in the entire city, certainly in the park, and for the low, low price of absolutely nothing, it’s time well spent to say the least.

The city of Cincinnati took me by surprise, a city in southern Ohio, bordering Kentucky, whose prime was over a century ago and yet it seems to be flourishing despite its gradual fall out of the spotlight. A welcoming blend of culture, history and modern amenities, Cincinnati is in fact one of the better cities you can find in the Midwest, and beyond that, its location makes it a likely stop for many who are traveling across this part of the country. That being said, most of its visitors and tourists come for one reason above all else, major league sports, but that in and of itself has breathed enough life into the tourism industry to make the city a welcome stop even for those who’ve never watched a game in their entire life. You can just as easily kill an entire day as you could a couple of hours, and like its museum, its size can be quite deceiving. The actual amount of land that the urban center occupies is really quite small but the density for points of interest is off the charts and clusters of unique and fascinating things can be found around nearly any corner. I’ve passed through it more than once but my preconceptions stayed me from ever really visiting the city proper. Now that I have however, I’m curious to know what else the Queen City has to offer, and I intend to find out before too long.