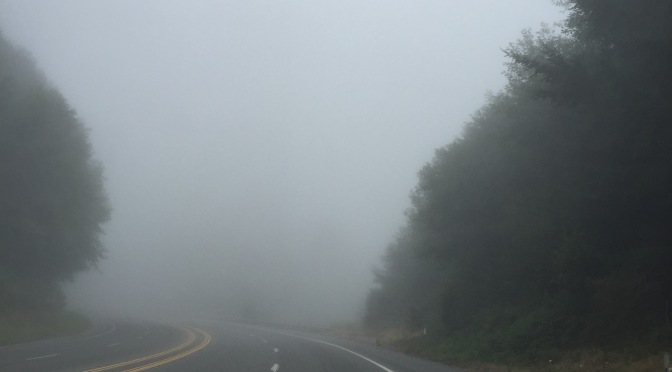 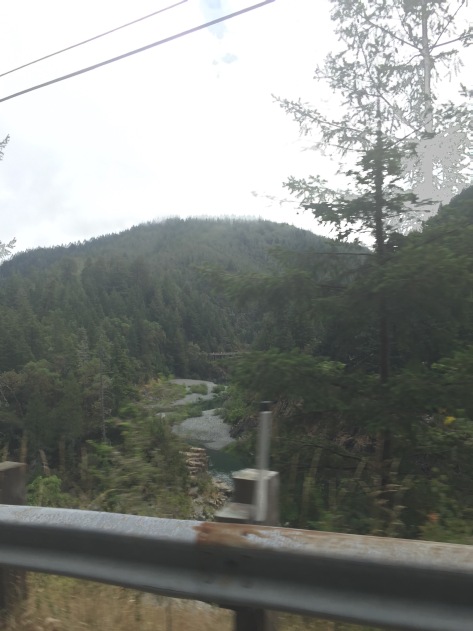 My apologies for the late start, the forests of Northern California have a seemingly intrinsic lack of cell towers. We spent the morning careening around mountains through a thick low fog, quite an adrenaline soaked journey. Finally though, were into Oregon and trough the treacherous forest/mountain roads, at least for now. The whole state smells like a giant lumber mill, it’s amazing. The smell of forests is everywhere, as well as actual lumber mills, contributing to this magnificent aroma. The sun is out and the fog has been left far behind in the city of Eureka. Never ever go there. If you’re going to see the redwoods, fly to Portland then drive down and stay in Eugene. Don’t even think about Eureka. The post explaining our reasoning should be up tonight. Anyhow, Portland is about 4 hours out, hopefully the weather holds. Also here’s a picture of the foggy roads, another reason to never visit Eureka. It’s pretty reckless. More updates to come. 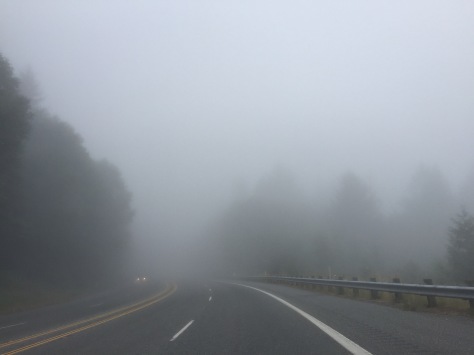 We’ve just stopped for gas in Oregon, completely forgetting why that’s so exceptional. Confused at first as a man walked up to us, a smile on his face, looking as if to greet us. I then remembered that in Oregon, nobody pumps their own gas, it’s one of the last places in the country with actual attendants. It was odd, sitting here as he did all the work (little though there was). Lumber mills still dominate the landscape, and the rolling gold hills of California are back, but with much nicer greenery atop them. The sky is a mix of clear blue and confused streaks of pale clouds, wandering listlessly into the horizon. Almost wispy, they come in waves, exploding gently outwards in little tendrils of water vapor. Also, mercifully, our phone service has returned as we find ourselves back on real highway. A welcome change of pace from the extremes of California, where you go straight from stand still grid lock to treacherous mountain roads. More updates to come.

We’re in Portland and struggling through 5 o’clock traffic. The city is beautiful, it feels like a giant Ann Arbor, with the homeless to scale. People with beards, beads, and bandanas line the streets, tatoos and dope sideburns are in as well. Truly the refuge for all us millenials who burnt out too early and wanted the 90’s to just keep on going. Ah. Remember VCR? Walkman? Original play station? How about that cool blue stripe you saw everywhere in the 90s? 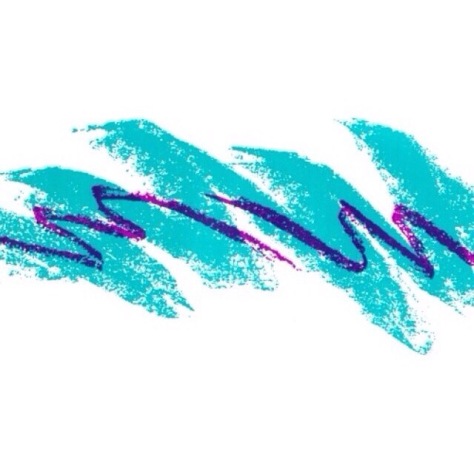 Yea that’s the one, they’re all here, alive and kicking in Portland. We’re attempting I explore the city, though it’s proving quite difficult. Still though, not the worst place to be stuck in traffic.