We’re just now heading to San Francisco, after traveling highway one along to Monterey. The late post is due to the lack of service as you travel between the Pacific and the Santa Monica mountains, essentially a 40 mile stretch of dead zone. The loss of LTE is hardly missed however as the coast is everything it’s hyped to be. The evidence of the ocean’s raw power is everywhere, the remnants of its destructive crusade against the coast seen as the battered shoreline of central California. A staggering amount of spires, caves, and pools populate the area, which can change from a sheer 150 foot drop to a gentle sloping beach in just a few minutes. The rocks were not only magnificent in construction, but also strikingly colorful. Kelp pools created areas of water painted a shade of deep red, contrasted by neon blue shallows and the kind of moss coverage that you always imagined would make an incredible bed. As I ventured out onto the rocks, a condor decided to ride the wind directly in front of, and subsequently right over me. 100% worth the stop, but get there earlier than ten a.m. or plan to come back tomorrow, because parking will be completely and totally nonexistent. 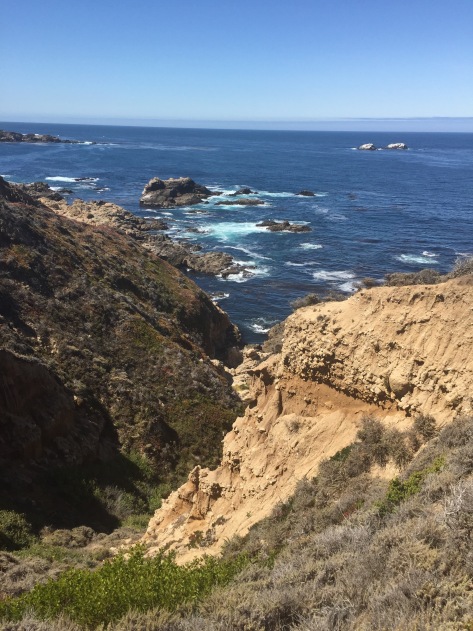 We’ve arrived in San Francisco and checked into the hotel. With three hours until we hit Alcatraz, the race is on to see china town, and then the presidio and golden gate. The weather is literally perfect here all the time, 74 and sunny, wearing long sleeves in anticipation of the island and it’s totally fine. Also for some reason, everything here smells really, really good. Every street either smells like flowers or food, it’s unsettling. More updates to come.