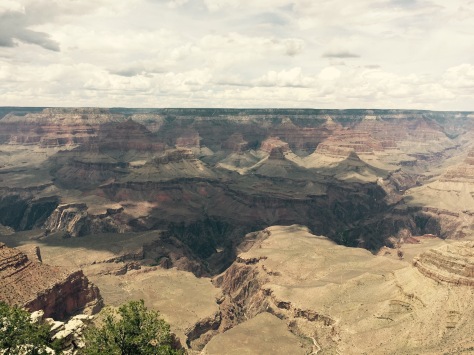 The Grand Canyon is a hard park to describe. We got in around 9AM Pacific, after driving though terrain that essentially looked like the alps. Pine forests, green mountains (even saw some ice on a couple) and winding roads. In my mind I had always envisioned the canyon in the middle of a desert, or perhaps surrounded by the same mesas we saw on the border of Arizona; but no, it was concealed entirely by forests, you’d have no idea it was there except for the unbelievable and very sudden rise in tourists.

It was crazy, literally busier than Disney World, there were people everywhere. We’re lucky we got there at the time we did, because when we came back past the main visitor center around 2, the lots were 100% full. The strangest thing about it was almost all the tourists where foreign. German, Swedish, French, and an overwhelming number of Chinese. We were the only people there speaking English, something the mother from Houston had recounted as well. It was literally impossible to find a stretch of canyon without people, but that’s not to say it wasn’t worth the trip. Quite the opposite. 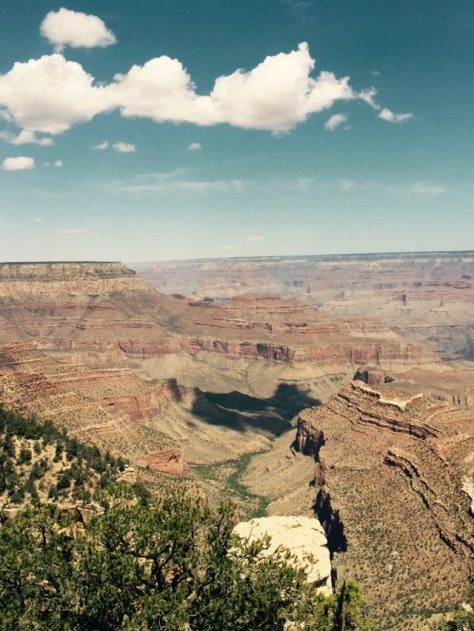 The canyon was unimaginable. As we trecked along the south rim, it felt as if someone had dropped a green screen right off the edge of the path. It just didn’t feel real, it was too big, too dynamic to really comprehend. I could spend months exploring this place, it’s just so cataclysmicly large, it actually takes 5 hours to travel from the south rim to the north rim, a fact that rendered a single day of exploration almost insignificant. For anyone who plans to visit this absolute staple of our nations geography, plan to spend at least a week, that seems to be the bare minimum req for really seeing the canyon.

We traveled the south rim for about an hour, the entire time only passing one other English speaking family. As we were headed towards the horse shoe mesa we spotted a large family, all staring out across the canyon. We walked up to see what the view was, and I distinctly heard “well I think it looks like a butt crack.”

We decided to travel the desert route (it’s not really desert) to the eastern rim, as the western rim is closed to vehicles during the summer. This proved to be a good decision as we ended up coming to Grand View point (2nd panorama), and I took the opportunity to gather some rather reckless photos. Standing out on ledges with 10,000 vertical feet of air inches away in almost every direction, your entire field of vision is utterly consumed by the canyon. It’s true depth can’t even begin to be captured by cameras, it’s staggering, it’s hard to put into words, the sheer power exuded by the land. To think that this was created by nothing but flowing water, over millions of years, it’s just incredible.

We continued on past various outlooks, each offering a unique and magnificent view of our surroundings. At the end of the desert view path is the east rim, and the watchtower. The watchtower is a massive stone tower, rebuilt sometime in the 20th century and turned into a viewing area. It was packed. A constant stream of tourists traveled in a slow line up 10 or so stories of stairs, usually at a pace set by somebody’s great grandmother as she eases her walker down them. The stairs were maybe 3 feet across at their widest point, and there were two streams of people constantly moving up and down them, one on each side. This caused great confusion and an uneliavable stench, as thousands of sweaty humans piled into what was essentially a massive stone oven with some windows at the top. That being said, the view made you forget all about it. 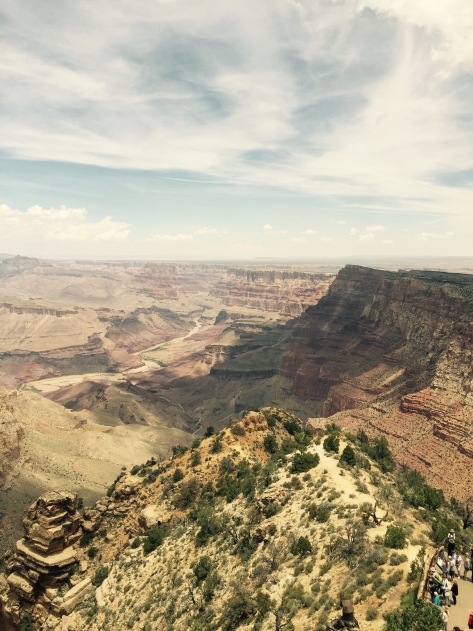 I could spend hours talking about the canyon, it was possibly the most amazing thing I’ve ever seen, definitely something you never forget. And as much as I moan about the crushing masses that invariably flock to this monumental place, I would go again everyday for the rest of my life if I could. It’s really just somewhere you need to be physically, to really appreciate.