We’re on the road again and headed to Lego Land. It may not be a staple land mark, but for any child of our generation it was the dream. 15 years later and we’re finally on our way, but not without some detours. As the biggest fallout fans you can find, we’re making it a point to hit up all the in game locations we can. First up is home sweet home, Goodsprings. On our way we’ll hit Primm, home of the Mojave express, the Ivanpah dry lake, the mountain pass, and of course the Mojave itself. The terrain has changed again from mountains to flat desert pans, but war, war never changes.

We made it into good springs. It’s unbelievable, it’s picture perfect. We walked into the Goodsprings saloon, and it was exactly like the game. The bartender asked us why we were here in this remote location, and after prying, we discovered we weren’t the only ones here because of fallout. Up to 20 people a day visit Goodsprings just because of the game. What was really amazing, is that even the people are real! The bartenders dad was Chet, Doc Mitchell is actually a dentist named Steve, and Easy Pete gives tours. Unbelievable. More updates to come. 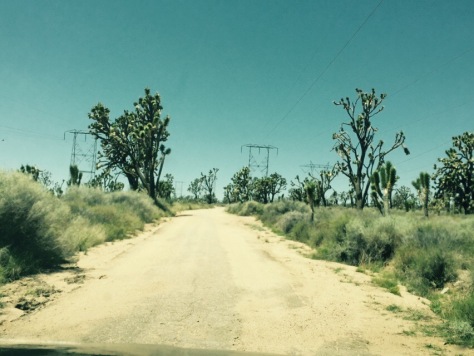 We’re in California and driving through the Mojave, which again, has completely defied our expectations. It is most certainly a desert, but what struck me about it is this: there’s only one word that came to mind when I looked out across it, “lush”. The plants out number the sand by a ridiculous margin, almost everything is a colored a nice dusty green. Cacti and agave have taken over completely in place of trees, and even look the part. It’s a truly alien environment, we drove across the Ivanpah dry lake, which, while definitely dry, could have fooled me as to its status as a lake. It was mountains, mountains covered in shrubs and the small burrows of various creatures, seeking refuge from the blistering sun.

Oh and speaking of the sun, we saw another New Vegas staple, something incredibly cool. The Helios One complex (The Ivanpah Solar Electric Complex). Truly a marvel of engineering, a square mile of mirrors covers the land, each is aligned to direct sunlight into one of three huge towers, at the top of which lie 360 degrees of high efficiency solar panels. These panels collect all the sun being beamed directly into them by the mirrors, drastically outperforming conventional solar farms, while managing to look like something straight out of a sci-fi movie. The tops of each tower gleam as bright as the sun itself, even in broad daylight the sheer amount of energy being blasted into them is quite evident. A big part of me wants to try and flash cook a chicken by launching it at a tower, but I feel like the armed guards might frown upon such a thing. More updates to come. 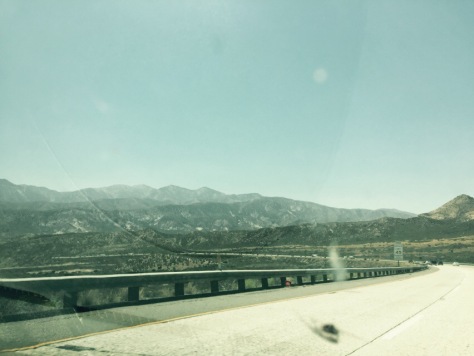 (I apologize for the dirty windshield, what you’re seeing is the exploded remnants of the many bugs that have perished upon our prow)

We’ve just stopped for lunch, and we’ve just caught our first sight of the Sierras (the infantile Sierras south of Bakersfield). The roads are insane, 6-8% downhills grades that slope in gigantic loops down through the mountains. The land is green again, interrupted periodically by great explosions of granite and limestone. They jut from the ground much like the Red Rock, is if to infer something greater lies beneath these hills, just barely contained by the colossal strength of the Sierras.

As I write this this we’re descending deeper into the mountains, the number of trains and railways has skyrocketed, as well as the number of vehicles. We’re soon to be in LA traffic, so don’t expect much excitement until about 4PM Pacific. Lego land is calling, and it sounds like, well frankly I can’t hear anything over the sounds of the Chili Peppers right now, but I’m sure it sounds like plenty of screaming children. More updates to come.