Our journey to Flagstaff was shaping up to be a rough one, no desert, no Route 66, we were feeling pretty low. But we were still on track to arrive far earlier than planned, and needed something to fill the time. We decided to check out the Petrified Forest national park is north east Arizona, as it was right on our route. It turned out to be the best decision we’ve made so far. The petrified forest is located in the painted desert, one of the most spectacular landscapes I’ve ever seen. The trees, from the Triassic era, have been fossilized; and some have even turned to various minerals, creating an unimaginable spectacle of light and luster. We entered the park expecting to kill an hour or so, and ended up having to stop at every single outlook, because the views just didn’t stop getting better. 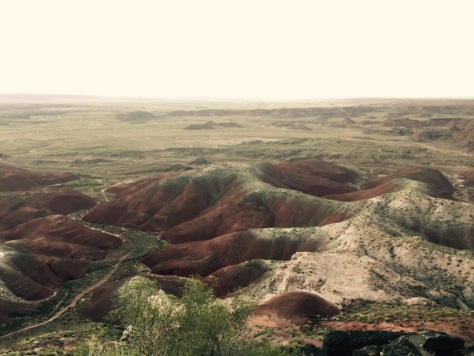 The park extends into the painted desert, an area of badlands created by various rivers which layered different minerals and sediment into the ribbons of color we see today. That being said, such a simple explanation almost seems innapropriate for such an amazing phenomenon. The area is filled with stunning outlooks, killer peaks, and various other geographical wonders. Every time we turned a corner a new set of mesas and canyons came into sight, painted a new set of colors. The vibrancy of the land was balanced only by its sheer magnitude, so large and so stunning one is almost forced not to blink, every ounce of vision is required to tackle it. Standing on an outcropping overlooking an enormous steppe, I could see the red white and grey ribbons extend for miles in every direction, finally curling back up to meet right beneath me, as if to craft some heavenly perch from which it was appropriate to view such a spectacle. I obliged the land at every turn, missing no opportunity to edge out onto a cliff or hop up a small rock formation to get a better view.  Unfortunately, the images captured on camera cannot even begin to compare to what it was like to really see it, to stand there being blasted by wind and rain (oh ya we got caught in the biggest thunderstorm I’ve ever been in), and feel the depth, and the dynamism exuded by everything around you. 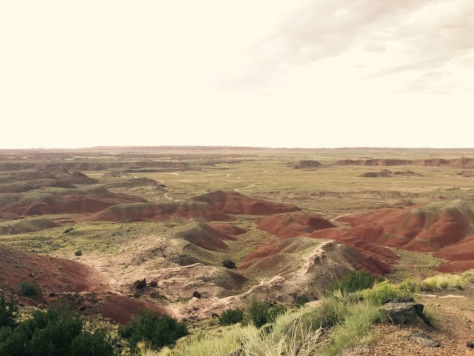 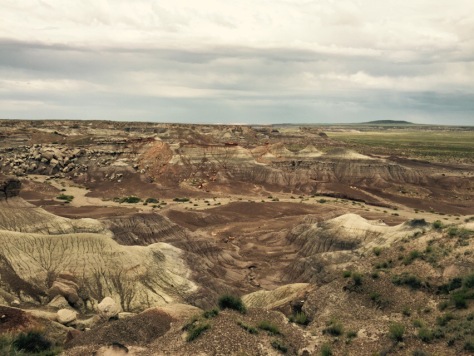 After exploring the mesas, we made it to the petrified forest itself. Compared to the majesty and power of the land which held them, the delicacy and apparent fragility of the petrified wood was odd to behold. However, upon closer inspection you will discover that they are in fact harder than steel, and I dare say a sight more good looking.

The ancient forest has crumbled like the pillars of Rome, and the trees lay in pieces strewn across the landscape; their outsides turned to stone, while their interiors gleam with Quartz crystals. It was an odd image, huge crystals that somewhat resembled parts of trees, thrown about in piles and smashed to bits where they fell from their primordial perches. We hiked through the ‘forest’ for about an hour, our photos getting increasingly more creative the further we traveled. The storm at our heels, we wandered through the maze of Amber and Quartz, thunder always in our ears, lightning flashing out of the corner of our eyes; but living in Michigan has given us a strange affinity for the weather, and we managed to evade the monsoon (literally it was a monsoon, little did we know, Arizona has a monsoon season. And it’s now) at every turn, while lesser tourists got flooded out and turned away, and one even got struck by lightning. All in all it was a truly phenomenal journey, one I wish I could put into better words, but I fear I don’t not posses such a capacity. These pictures will just have to do. 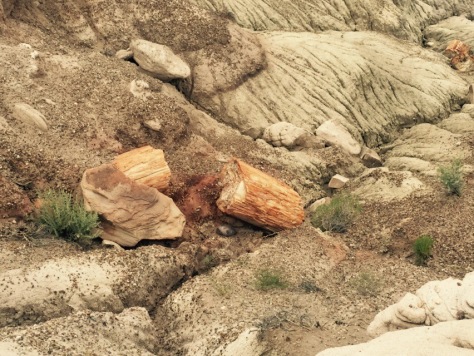